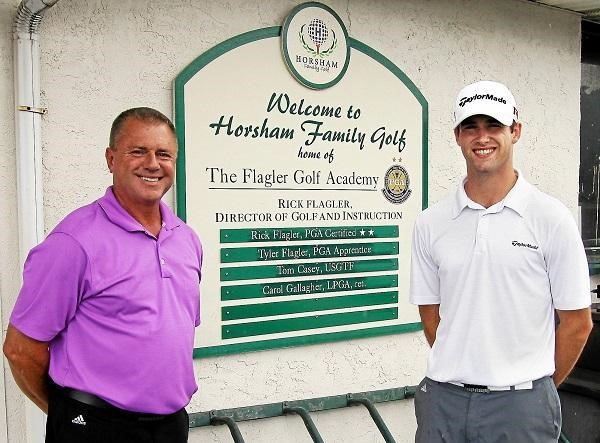 HORSHAM >> Whether it’s tossing around a baseball and hearing the pop of the leather glove or lacing up a young boy’s cleats for his first pee wee football game, there is an almost sacred bond formed between a father and son who share an interest in sports.

For PGA Certified Instructor Rick Flagler and his son, Tyler, it all began with a yellow, plastic driver.

Founded by Rick around 2003 and formally established at Horsham Family Golf in 2010, he and Tyler — who joined the Academy as an instructor in June 2014 — have been helping golfers of all ages refine their mechanics and improve their golf game as a whole.

“For me, the teaching is the next best thing to playing,” Rick said. “I also remember not learning, what it was like to have to learn as an adult and the frustration, so it’s nice to help people get past the learning curve.”

Rick is a PGA Certified Professional, an accomplishment that less than 2 percent of all PGA members achieve, and serves as the director of instruction at Horsham Family Golf.

To become a PGA professional, according to Rick, one must either attend a dedicated program available at a handful of schools or study the bookwork on their own. The bookwork alone can take up to six years of studying to complete. Finally, depending on the course rating, a golfer twice must not tally more than 155 strokes over 36 holes in one day.

Rick’s list of accolades and achievements is even more impressive considering he didn’t start golfing until he was 23.

After playing basketball and baseball in high school and continuing to play baseball in college, Rick said he was looking for something different to satisfy his sports itch after graduating.

“Sports was always a huge part of my life,” Rick said. “I wanted to find something to do when I got out of college and I just picked it up got hooked.”

Rick got into the golf business in 2003 after working in distribution for his family’s business.

But Rick explained that sitting behind a desk all day didn’t quite provide the excitement he was looking for out of a career, so he started an indoor golf facility and eventually put much of his money into it. It was at that point he realized if he was going to invest his money into the business, he might as well learn every aspect of the golf business, including becoming an instructor.

Tyler, 23, on the other hand, is a PGA Apprentice and is studying to become a PGA Class A Professional. While Rick first starting to golf in his 20s, Tyler first picked up a club at the age of 5.

“My dad got me into it as a kid,” Tyler said. “He got me plastic clubs and I enjoyed it and just stuck with it all the way through high school until now.

“Everything I’ve learned has been from my dad. He’s been teaching me my whole life. We both had the same instructors, so we have the same concepts on the swing. We might have different swings, but we have the same swing thoughts and it’s nice to be able to talk it out.”

Beginning at the age of 16, Tyler began to work demo days and do fittings for Cleveland, followed by Taylor Made at 18, all thanks to connections made by his father over his years in the industry.

Following a championship career while part of the golf team at North Penn High School, Tyler decided he wanted to focus more of his time on his bookwork in order to fulfill his dream of becoming a PGA Professional instead of pursuing a four-year education in college.

Tyler did, however, obtain an associate’s degree in business from Montgomery County Community College at the urging of his father since Tyler had expressed an interest in following in his father’s footsteps by entering the golf business.

Asked which one was the better golfer, Rick immediately pointed to Tyler.

“But he’s got more knowledge about golf,” Tyler said. “He knows course management better, he knows the right things to do on the course. As far as playing, yeah, I have an advantage because I’m younger, so I can hit it farther and get it closer to the green.”

Rick has a couple things on his bucket list that he’d like to accomplish in his career.

One is to be able to attend the Masters Tournament in Augusta, Ga., with Tyler. As a PGA Professional, Rick does receive tickets to PGA events and he can bring guests along with him. The Masters, however, is a single admission ticket. Once Tyler is able to become a PGA Professional as well, he’ll be able to receive all the perks his father does, including a ticket to the Masters.

Another item is to become a Master Professional — the highest PGA honor attainable. As such, Rick said he’ll essentially have to complete a thesis and present it.

And finally, Rick said he would like to someday establish an academy down south in order to provide year-round instruction for when the harsh winter weather rolls around here in the Northeast.

Asked how much longer he plans to run the academy and continue as an instructor, Rick said he doesn’t plan on giving up any time soon.

“I’ll die on the lesson tee,” Rick said. “I love to teach. It is absolutely, exceptionally enjoyable for me. When you see people have that “ah-ha” moment and the light goes on and they start to get it, it’s awesome to get to share in helping someone see how to do things and to see them improve.”